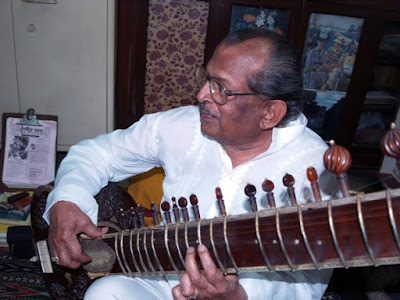 Kashinath Mukherjee is a Hindustani classical musician and sitar player of Etawah Gharana.
Kashinath Mukherjee was born in Kolkata into a aristocratic family having a rich cultural heritage.
His father Shital Chandra Mukherjee was a scientist specialized in chemistry, as well as a learned dhrupad singer, a disciple of Pramatha Nath Mukhopadhyay, who himself was disciple of Wazir Khan of Rampur. He is younger brother of world renowned film director Hrishikesh Mukherjee.

His whole family comprises of academic super achievers. Inspired by elder brother Hrishikesh Mukherjee (who became world renowned film director later), he started to play sitar of his own, even before starting to learn formally.
Later he learned Sitar from Srinivas Nag (disciple of Ustad Enayet Khan) for twelve years. After demise of Srinivas Nag, he was under tutelage of Ustad Vilayat Khan, one of the greatest sitarist. During this period he kept away completely fro
m public appearances, as directed by his Ustad.


Mukherjee's repertory is a happy synthesis and stylistic amalgamation of the stylic innovations, profoundness and compositions of Imdadkhani-Etawah Gharana, Spirital depth and complicated taan patterns of Ustad Amir Khan and soulfulness, romanticism and dazzling brilliance of Ustad Bade Ghulam Ali Khan.
Mukherjee has participated in major concerts both at home and abroad. He is the recipient of the ITC Sangeet Samman award among many others.
He has disciples around the globe. Ramprapanna Bhattacharya and Abhik Mukherjee are among his most prominent disciples. 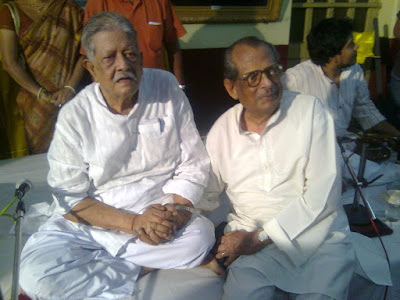 Thank you for posting this article! I study under a former student of Pt. Mukherjee's and it's a pleasure to read some more info on this wonderful musician and teacher.