The Profound Value of Tutelage

That Pandit Arvind Parikh is an extremely committed researcher, composer and guru is a well-known fact. As a guru, he has blended modernity to infuse new life to the age-old guru-shishya parampara. The Bhatkhande Jayanti Celebration at the Sangeet Natak Akademi’s Sant Gadge auditorium in Lucknow saw the extremely dedicated Arvindbhai being awarded with “Guru Samman” by the Bhatkhande Music Institute (a deemed university) under the inspired guidance of its vice-chancellor, Vidushi Shruti Sadolikar. Uttar Pradesh governor Ram Naik did the honours.
On this occasion, sitar virtuoso Ramprapanna Bhattacharya, worthy disciple of Arvindbhai, mesmerised the audience with his rendition of raga Puria, replete with alap, a jhaptal gat composed by his Guruji and the famous teental tarana popularised by his dada-guru Ustad Vilayat Khan that led to jhala. His style was a good blend of emotion and skill. When asked about his experiences as a disciple of such a renowned personality, Bhattacharya, who also holds a senior position in the IT sector, etched a brilliant profile of his guruji.
Asked who initiated him to sitar and what led him to Arvindbhai, given that he belongs to a music-loving family of Kolkata, he said, “My greatgrandfather was a clarinet player and a close friend of Acharya Girija Shankar Chakravarty, Amiya Nath Sanyal and other contemporary musicians and musicologists of Bengal. My father, Ram Udar Bhattacharya, got a very rare opportunity to learn under the doyens of many leading schools of instrumentalism, including Ustad Ali Ahmad Khan (Senia-Maihar gharana), Ustad Mushtaq Ali Khan (Jaipur Senia gharana), Pandit Gokul Nag (Vishnupur gharana) and Pandit Indranil Bhattacharya (Senia-Maihar gharana).
“My father initiated me to sitar at a very tender age. Then I learnt from Soumitra Lahiri for a brief period. Upon observing my inclination towards Gayaki Anga Sitar baaj, Pandit Kashinath Mukherjee accepted me as his disciple in 1997 and trained me for almost a decade. When I was moving from Kolkata to Pune in 2005, my well-wisher, Jayanta Chatterji, also a great patron of classical music in Kolkata, advised me to get in touch with Pandit Arvind Parikh for talim.  I still remember his text message, ‘In Abba’s (Ustad Vilayat Khan’s) absence he is the best person to learn from.’ Pandit Kashinath Mukherjee, from whom I was learning, also happily advised me to start learning from Guruji. I must say it was my destiny. It was my privilege that Guruji accepted me as his disciple. I go to Mumbai for lessons and it is still continuing.”
Aked what reasons he could ascribe to guruji rating him as one of his best students in sitar, Bhattacharya said, “As Guruji frequently mentions, the word ‘disciple’ is closely related with ‘discipline’. The parameters by which Guruji evaluates students are regularity, loyalty, sincerity, respect for the Guru, music and instrument. I try to adhere to these with the best of my capabilities. That may be one of the reasons Guruji considers me a worthy disciple. What else do I need!”
So how different was his teaching method and how did it help him? “Guruji is a matchless thinker with an exceptional analogical and analytical mind, with fantastic power of articulation. He and his Ustad (Vilayat Khansaheb) were the same age, they actually grew up together. He mingled and interacted with great vocalists and musicians for several decades and acquired a very deep insight in almost all the aspects of Hindustani music, including the subject (matter) and execution (manner). We, his disciple, are directly getting benefitted with this assimilated knowledge and wisdom. His teaching method is very detailed, at the same time intricate, scientific and to-the-point,” said Bhattacharya.
“For example, he explains how the same melodic phrase ‘Sa- Ma’ will be different in Kedar, Bageshree, Bhatiyaar, etc. He emphasises the difference in treatment of the same note (Komal Gandhar) in different ragas (strong in Barwa, neutral in Kafi and weak in Desi). He explains the different common and uncommon variants of Bhairav, Malhar, Kanada, Kauns, Sarang, Bilawal, etc. This helps gain deeper insight into ‘Raagdari’. He has a huge collection of authentic vocal and instrumental compositions. He, too, has composed several bandishes which are highly appreciated by musicians and connoisseurs alike. Guruji’s deep introspective and meditative approach towards music also helps me to grow as a musician.”
Given Arvindbhai admittance to being a Bhakti-margi (devotee of music), did he approve of his focus on skill play? “My father emphasised the need for regular and rigorous practice since my early childhood. Later, I realised that without achieving a certain degree of technical competency, execution of full-fledged Gayaki Anga wouldn’t be possible on sitar. Hence riyaz has always been an essential aspect in our gharana. As per my understanding, there are four aspects of taiyari: content, clarity, sustenance and speed, whereas people generally think only about speed.
“Guruji is fine with taiyari as long as it is surila (melodious and tuneful). He reiterates Ustad Vilayat Khansahib’s words from time to time, ‘Arvindbhai, Taiyari bhi Sureli honi chahiye.’ In fact, he guides us to blend devotion in virtuosity – a path shown by his Ustad,” Bhattacharya said. 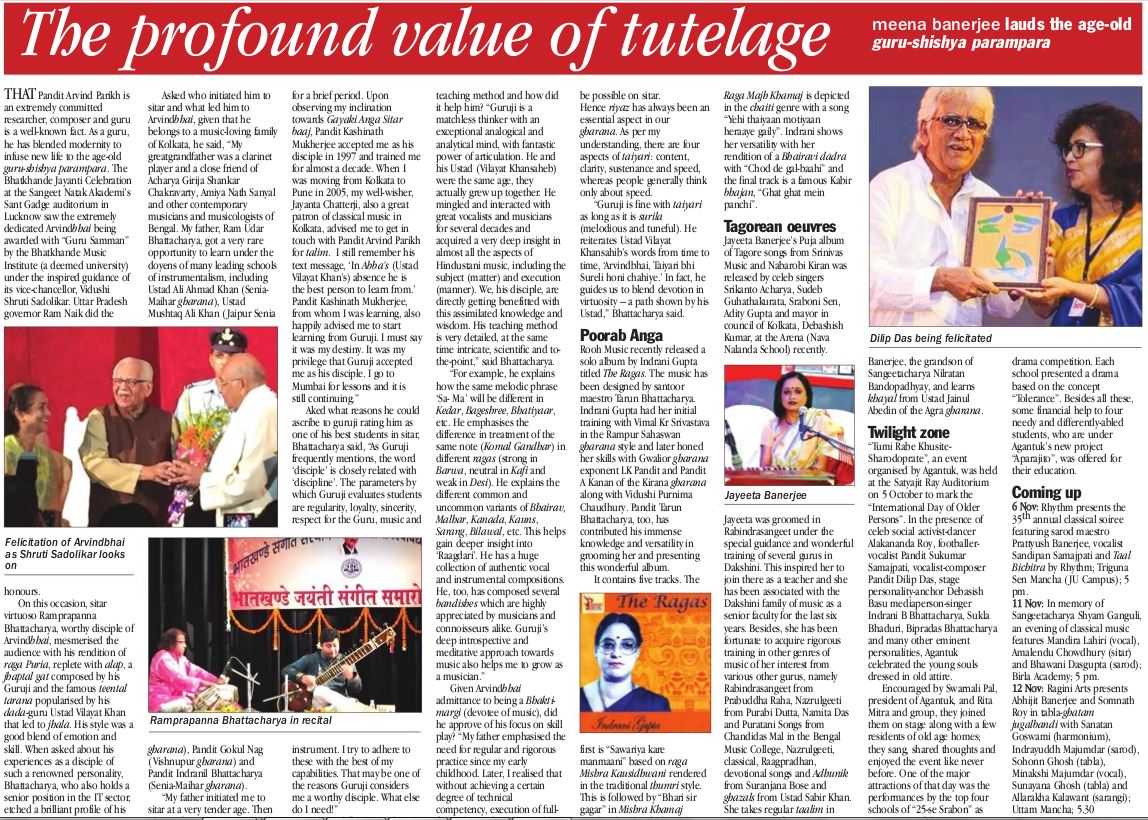 Posted by Ramprapanna Bhattacharya at 4:22 AM