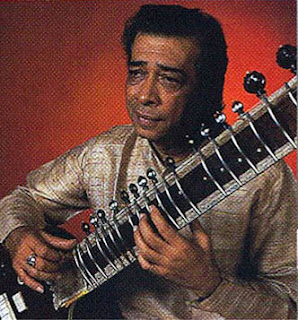 Pt. Indranil Bhattacharya (April 1942- September 2001) has been a legend in his own life time. Born in Calcutta Indranil had a rich legacy behind him. Son of the Legendary Timir Baran - the father of Indian orchestra, Indranil hailed from a family of scholar, priests , and musicians. He traces his lineage to Jadu Bhatta - the doyen of Vishnupur Gharana . Great men of religion like Ramkrishna Parahamsa Dev, Swami Vivekananda, Bama Khepa were regular visitors to their house for religious discourses. Initiated into sitar by his own cousin brother the Late Amiya Kanti Bhattacharya - the celebrated disciple of Ustad Enayet Khansahib (father and guru of the great sitar maestro Ustad Vilayat Khan), Indranil subsequently travelled to Maihar which became his home for the next ten years, where he received rigorous training under the watchful eyes of the great Guru Baba Allauddin Khan Sahib.

Once out of Maihar, Indranil after much struggle, hit the head lines in the year 1966 in Bombay after a brilliant performance. The next forty years saw Indranil at the helm of his musical career receiving acclaims and accolades even from the farthest corner of the globe. Being the worthy torch bearer of the Senia Maihar Gharana Indranil joined The Ali Akbar College Of Music, California,at the invitation of the great Ustad Ali Akbar Khan. Indranil soon won hearts wherever he went with the finesse of his performing skill and with flair of his music. Whether performing in India or abroad he became the listeners delight, mesmerizing his audiences with his soulful rendition. Immensely aesthetic and appealing ,yet firmly rooted to tradition , Indranil's music always bore the mark of' taalim' that he imbibed from Ms Swuut Stressing on ' raagdari' and authenticity of the 'gayaki' and 'tantrakari aangs1; a profound phiosophy pervaded his music. His masterful delineation like Raga Kaushik Kannada, Darbari, Malkauns, Basant Mukhari, Jayjayanti, to name just a few, enthralled his audience with their lyrical resonance and internal gravity. 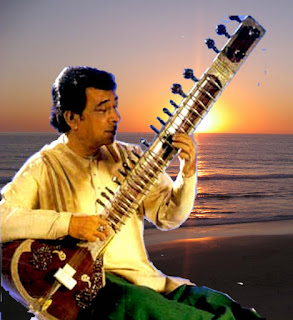 It is in the soil of Santiniketan - at the aashram of Gurudev Rabindranath Tagore, Indranil finally discovered the peace of his mind and the happiness of his soul. In Santiniketan we find him combining in himself the role of an ardent Guru, an able administrator with that of a brilliant musician, with elan.


Charismatic, expressive, Indranil stole the limelight with a panache that was his very own. As he left this world for his place in eternity his music has been immortalized through his countless 'shishyas' - disciples, propagating his message throughout the world. His music still continues to flow like a ripple in his audiences worldwide.

Email ThisBlogThis!Share to TwitterShare to FacebookShare to Pinterest
Labels: Article, My Father's Guru

Ramprapanna Bhattacharya
Ramprapanna Bhattacharya is a next generation Sitar virtuoso, teacher and performer. He is representative of the younger generation of the famous Etawah Gharana. He was initiated to Sitar by his father Sri Ram Udar Bhattacharya and received intense guidance from him. He learnt from Sri Soumitra Lahiri for a brief period. Subsequently he was privileged to have talim from Late Pt. Kashinath Mukherjee, a prime disciple of Ustad Vilayat Khan & Ustad Amir Khan. Later he took lessons from Pt. Arvind Parikh too. He has performed in prestigious venues in India and abroad. He is known for his captivating and vibrant sitar performances, thoughtful teaching techniques and traditionally authentic approach towards music. �� ramprapanna.com �� ramprapanna.sitar@gmail.com ☎️ +91 8142 803 372 �� patreon.com/ramprapanna